Human Immunodeficiency Virus (HIV) infects cells by first binding to specific receptors on the cell surface, then entering the cell. HIV uses two receptors to gain entry. One receptor is termed CD4 and is on the surface of cells belonging to the immune system.

Once inside the cell, HIV engineers a copy of its genetic information to become an integral part of the cell’s genes.

It does not kill the cell it has infected, but it takes advantage of the cell’s machinery to make new virus particles that are released from the surface of the cell. The new virus then attaches to a new, uninfected (CD4) cell, to repeat the process.

Not all virus-infected cells produce virus particles all the time. Some infected cells do not produce new virus particles unless they are stimulated to respond to another type of infection, such as the flu, or a bacterial infection. Once stimulated, they begin to produce new HIV particles, and then die. Because CD4-cells are a key player in immune responses to all types of infections, the relentless loss that results from HIV infection gradually erodes the immune system, which leads to AIDS.

Most of the HIV-infected cells are in lymph nodes, a few circulate in the blood stream, and others are scattered throughout the body. Importantly, even after 25 years of research, the organ source of semen HIV is unknown.

Semen is a complex and unusual body fluid. It does not exist anywhere within the body, it is created by ejaculation of cells and fluids from three tissues (epididymis, seminal vesicles and prostate) carried by two duct systems (vas deferens and urethra). Each semen specimen is unique. 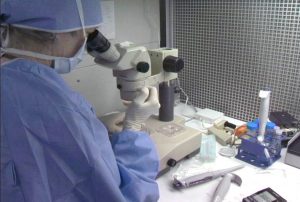 The testis produces millions of sperm each day which take about 6 weeks to mature from large round immature cells (spermatogoonia) to stream-lined cells with a tail that moves. The sperm are produced inside tubes within the testis which protects them from the outside world. Once they gain tails, they leave the testis and enter the epididymis. Their transit through the epididymis takes another few weeks, and they are stored near the vas deferens, the tube that connects the testis/epididymis with the urethra in the penis.

At ejaculation, muscles in the epididymis, vas deferens, seminal vesicles and prostate all contract to force sperm and fluids out the opening of the urethra. The average specimen is about half a teaspoon in volume and contains approximately 100 million sperm and 2 million non-sperm cells. The non-sperm cells are either immature sperm that left the testis prematurely, and/or cells that belong to the immune system, including CD4-cells that come from the epididymis, the prostate or seminal vesicles, and that could be infected with HIV.

HIV is the first viral epidemic to be treated by drugs instead of vaccines. To date there are about two dozen antiretrovirals, plus several drug combinations. The drugs either inhibit virus entry into cells, or inhibit some part of the HIV life cycle so the production of new virus particles is halted. Effective antiretroviral therapy reduces the number of free virus particles circulating in blood to zero, but it does not eliminate HIV infected cells in circulation, and it may not eliminate HIV from semen specimens.